It’s Hard to be Grumpy in London

Well, not if you’re a kid and you got up way too early, I suppose. And I guess my travel companions would argue that there were times Friday when I was a bit frayed at the edges, so maybe the title should be “it’s hard to stay grumpy in London.”

I like visiting large cities. The museums and shops of Minneapolis, St. Louis, Kansas City, Chicago, Seattle, San Francisco, New Orleans, Vancouver—I’ve been there and would willingly go back. New York City is prominent on my list of places I want to go, and if you’re planning a trip to D.C. any time, I would love to be with you.

In particular, I hope to get back to San Francisco.

But though I love all the cities on my continent, London seems like a special place. It’s so steeped in the world—more of an international crossroads than any American city. It bears the marks of its sometimes volatile, violent history. It seems a bit cleaner than many North American metros. Despite its vast size—London is a huge, sprawling city—it is also human in scale, with narrow walkways, bike paths and streets.

It’s a city of glittering, ugly new skyscrapers. But in other areas, the buildings are only 4 or 5 stories high—creating a crowded cityscape that is nonetheless more light and airy than many central urban areas.

We were lucky this year to spend spring break in England. Friday was our full day in London. We arrived Thursday and depart Saturday, and I am thrillingly awaiting my first visit to the British Museum today. Thursday was the Science Museum, an accidental stroll through Imperial College, Hyde Park and a pretentious museum in the Greenwich neighborhood that was actually a extensive advertisement for how self-consciously cool the real estate in the Greenwich Peninsula is.

The underground is loud and crowded and smells of oil and age, and I love it. As my wife and two granddaughters were on our own for the morning, my son-in-law had specified the route—take the Jubilee Line to Green Park, and switch there to the Victoria Line for the tube to South Kensington Station.

I was a little paranoid about riding the wrong way, but as Audrey pointed out, if that happens you just hop off the train and take one headed the other way.

The Science Museum, when we got there, was crowded and noisy. I spent my time chasing after grandchildren rather than strolling through the technology exhibits, which would have been my choice. Still, playing with grandchildren is a pleasant way to while away a morning, and it was a prelude to a glorious afternoon.

March in Iowa is a transition month, a mix of winter and spring that will bring 10 inches of snow today. While England saw a rare snowfall earlier in March, and the weather has been cool, it’s still very much spring here, with flowers in bloom and green grass, even if the trees have not yet woken from winter slumber. Friday afternoon was strolling in Hyde Park.

If I came here with just adults, I would be tempted to rent bicycles to see more of the park, but what I did experience on a pretty spring afternoon convinces me that one of the glories of Britain, besides the Beatles and Monty Python, is parks. Their playgrounds tend to be wood and metal and sturdy and old-fashioned, with swings and teeter totters and dangerous things that would not ever be built today in North America, where playgrounds are plastic and padded and safe and dull by comparison.

The day was also filled with food. We had lunch at a quick food shop that defies description. With its rice base and spices, I considered it Asian, but my son-in-law says it was a French fusion place. Whatever. It was filling and good and definitely not McDonalds.

And when we grew tired in the afternoon and had the early rush hour Underground journey back to our temporary apartment by the Thames, there was a stop for sticky toffee pudding. If you haven’t, perhaps the expense and time of a flight to London is worth your while to experience that dessert. I liked it, although, in full disclosure, I know from personal experience that my daughter and son-in-law can whip up an even tastier version of this treat.

The Brits don’t have a great reputation for culinary genius, but in my experience, eating in England features delightful dining. True, they invented beans on toast as a meal, but they also created fish and chips and sticky toffee pudding.

Well, God save the Queen and all of her subjects. I visited a pub in Norwich earlier this week and hoisted several pints. Cheers to England and to London, which right now is about my favorite city in all the world.

Of course, my opinion may be tainted. We’ve been hosted by my delightful oldest daughter and her family. There are two active, bouncy girls to play with and a baby boy to cuddle. That and Hyde Park—what more can one ask of a great city? 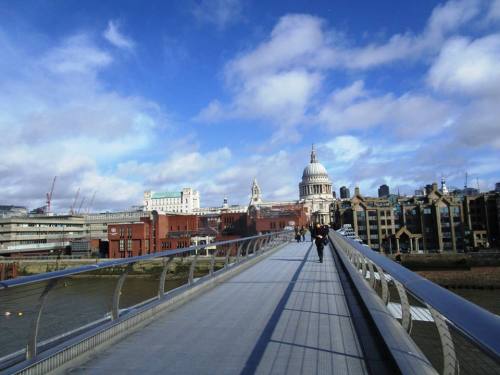 On walkway across the Thames, looking back towards St. Paul’s.

I’m sure it’s not a shock that there was too much to see and do in London that it would not fit in a one-day visit.

Last week, my wife and I were hosted in London by our daughter and son-in-law. We took a train from Norwich Saturday morning, visited two museums that day, walked about central London Sunday morning, and returned by rail to Norwich Sunday afternoon. 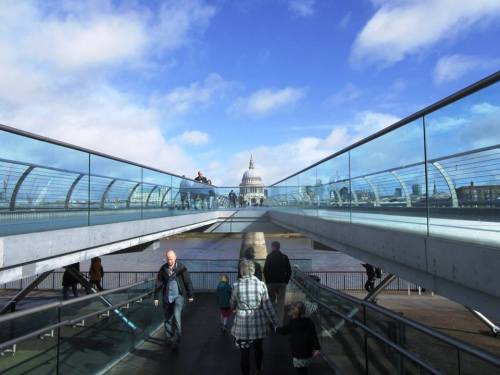 Along the way, we had a very nice Easter dinner in a local restaurant. It was a very pleasurable visit, and I thought about all kinds of things I would like to do now in London that 24 hours would not accommodate:

•    Visit the British Museum. I was in the same town as the Rosetta Stone, but didn’t stop by to say hi.
•    Ride the Eye. Easter weekend was a busy time at any tourist attraction in London anyway, so not standing in long lines for a giant Ferris Wheel was, all things considered, a good move. But it would be nice to spend a few days in London and maybe ride that thing on a random Tuesday or Wednesday morning when the crowds and lines are merely large and not hugemongus. This particular ambition, by the way, may come as a surprise to my kin and friends because I have a well-deserved reputation of being terrified of heights in general and Ferris Wheels in particular. But just as I can fly to London despite the clear irrational nature of the activity (you want me to strap myself into a pressurized metal tube that flies 10 miles high and trust it will both ascend and descend safely?), so I think I could screw my courage to the sticking point and ride in the London Eye, stealing brief glances at the city in between shutting my eyes or staring fixedly at my feet.
•    Do art. I would have to research which museums to stop by, but I generally love art museums, and didn’t stop in any during my brief, first visit to London.

Not that London is paradise. There is a thing called “weather” and it doesn’t play to the city’s strengths. There is a saying in Iowa that if you don’t like the weather just wait 10 minutes—in our volatile climate, the same week or day can feature warm sun, cool rain and snow, as this week testifies.

London, based on my small sample, is more so. We were blessed with sunshine Sunday for our stroll along the Thames, but we were also cursed with sudden, nasty cold rains that had us scurrying for shelter in doorways or under bridges. We saw sun, wind, rain, hail, and, briefly, snow—all in the course of one three-hour stroll.

At least we had some sun.

Granddaughter peeks out at cold, heavy rain. We are sheltering in a church doorway.

Also, London is also not the cleanest of cities. It’s not drab and black and smoggy as it used to be, by accounts I’ve read, and I’m grateful for that, but the Brits could learn to use the waste bin a bit more efficiently. Then again, to be honest, I’m not sure London is as dirty or dirtier than any large American city, where there are plenty of litterbugs, too. Maybe Norwich, a much smaller place, spoiled me a bit.

London is also full of Londoners. You have to get used to being in a crowd most of the time, which an Iowan isn’t. I didn’t’ find that to be a nasty or unpleasant experience, just a bit of a new sensation.

Of course, we were visiting the Natural History Museum and the Science Museums on Easter weekend, as was, apparently, most of the inhabitants of the small island nation were London is located. So crowds were partly an artifact of where we were when we were there—and on many parts of our walk—the journey back from the Easter restaurant, for instance—we had the narrow, inadequate sidewalks of the old imperial capital mostly to ourselves.

London! Dinner at the Chop House, dinosaur bones and old planes, fantastic architecture and a pleasant tidal estuary to stroll along and over—you are, all in all, a wonderful city. It didn’t hurt that I was surrounded by family during the visit either—it’s always nice to be in a strange place with familiar people who know their way around, and I am grateful to Matt and Amanda (and Lizzie and Juliet and Audrey) for sharing the experience with me.

I will treasure many memories. I was very enchanted by the underground and the rail system in Britain—it’s a country that makes traveling without a car an easy thing, something that the U.S. should look into sometime. The museums that we did visit were fascinating, especially the Natural History Museum where we got to say hello to Charles Darwin who was taxidermied and placed in a hallway there (not really, it’s just a statue, but this is April 1). 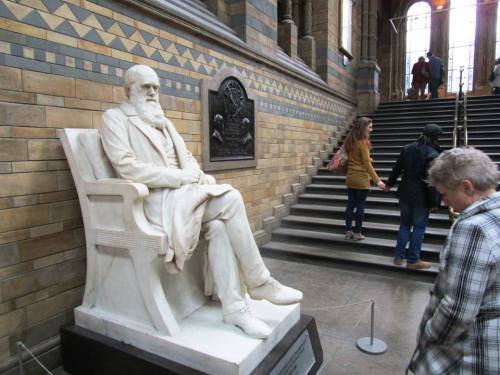 At one tube station, there were lifts to take you to the street. While Amanda and Matt and family wisely rode those lifts, my wife and I walked up the stairs.

Looking back at many, many stairs I have just ascended. Way down there is a tube station. Way, way down there.

The sign warned us that the number of stairs was the equivalent of a 15-story building. I don’t know about that—maybe British stories, which, like everything else in Britain besides museums are smaller than their American equivalent—but it was a hike. Better to look back on than forward to, I’ll give it that. We made it, and frankly we enjoyed the long hikes—and were very impressed at how well our young grandchildren did doing much of their London adventure on foot.

London! I hope to see you again.