Taylor Z and Billie B and Others Win Awards 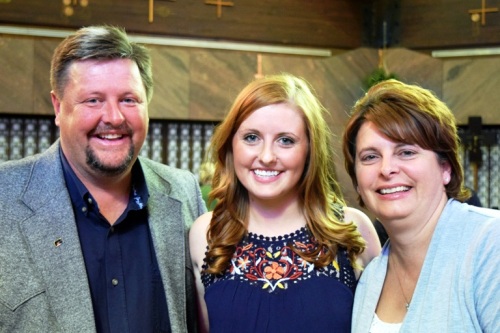 Taylor Zumbach, outstanding communication student of the class of 2016, with her parents.

And the Managing Editor of the Mount Mercy Times, Taylor Zumbach, was named the winner of The Sister Mary Agnes Hennessey Communication Award.

So it was a good night for some of my favorite students. I’ll miss both Taylor and Billie. Taylor was a spark plug at the newspaper, bright and energetic, almost always upbeat, willing to work hard and ready with a quirky sense of humor. She and I discovered we like many of the same jokes and same musicians—she’s another Tom Petty fan—and she used to say that she spent way too much time with me.

I’m sure when it got to be 1 a.m. and we were finishing an edition of the MMU Times, that was probably true. But I’ll sorely miss her persuading me to try the worm, or weaseling her way to some cake mix cookies.

Billie was also a key staff member. Probably our most advanced writer, she was prolific and gifted. It’s no surprise she swept the English awards. She is a very talented wordsmith.

I enjoyed seeing other students I know win various other awards, too. Meg Monson, one of most focused, talented young woman I’ve met, earned several awards. Amazing-Grace Ighedo, a December nursing graduate, won the top award for that major. Hillary Kaefring, a talented soprano who has performed several times with the MMU Handbell ensemble, and who I had the pleasure of having in class just once, and that was this semester, won music and drama awards.

And in a very poignant moment, Aimee Redlinger, who lost a teen daughter to an accidental shooting not that long ago, became the first Advance student to earn the President’s Award, one of the top three awards given during Mount Mercy’s commencement weekend.

Sigh. It’s bittersweet to attend this ceremony. Class of 2016, I will miss you. Meg and Emilie and Hillary and Melissa and … well, many others. So long, but not farewell, I hope.

I’ll miss you both the most, Billie B. and Taylor Z. There should be a song lyric in that somewhere …