I already wrote about planting seeds with the aid of two granddaughters, so I’ll let that just be part of the Earth Day march for science post.

This week, cool April weather returned. We’ve had a generally warm and pretty April, but in the second half of the week, cold and clouds rolled in. It rained, and snow was also in the air, although I did not see any of the white flakes, and I’m OK with that.

While lows have been in the 30s, thankfully we have not really had a freeze, and with April entering its final days, I would expect that the weather trend soon will be much warmer.

Before the rains moved in midweek, on Tuesday morning I did a very quick walk in the gardens about before leaving for work, and I made some flower images in a few stolen minutes during the attractive golden light of morning.

I’m glad I have several different types of crab apple tree. Some are already getting past prime, but others are just coming on. In the front yard, the larger white crab apple is shedding many of its pedals, while its pink-and-white cousin (both trees were tiny twigs when they went into the ground on the same day, part of the same Arbor Day Foundation set) is just getting into its prime.

Tulip in back garden.

Same story in the back yard—some crab apples are getting beyond prime bloom time, others are just kicking in.

The Moscow Lilac is at its peak and may be faded when sunshine returns. Redbuds, for the most part, are starting to put out leaves, so the pretty pink flowers aren’t going to be around long. One darker Redbud in front, however, is just getting ready to bloom.

Bluebells are still blooming well. Some Lily of the Valley have heavy looking buds, just getting ready to bloom. Early peonies are going to pop any day now—maybe once the sunshine returns.

Well, cool rainy days aren’t the best days to be outside. Still, to a gardener, cool damp days at this time of year are welcome. New grass is sprouting in back. And the grandkids and I recently planted seeds—and you know what they say about April showers.

Coneflower Season: Summer is Nearly Over

I like coneflowers, and have planted a number in my gardens. At the side of the house, where they get about two hours of sun in the middle of the day, they thrive.

Much of my gardens are too shady for them. And while I have tried a few other variations, such as pink, frilly coneflowers or double coneflowers, it’s the common purple ones that thrive.

These are native flowers that I like, so I’ve tried to get them going at the sunny edge of the woods behind my fence, but to no avail. They can spread like mad in the garden, but they can be finicky, too. Or many garlic mustard is just too fierce a competitor.

Anyway, in the final two days of July and today, the first day of August, I’ve photographed many of the flowers blooming in my gardens, which I present in the slideshow.

Besides flowers, I shot some crab apples growing on a new tree I planted this year, and some random leaves just because I liked the late afternoon sun on them. I also shot an apple leaf damaged by Asian beetles, although the beetles are not causing as much havoc this year as in most years.

I’ve in a mellow mood, but summer is ending and I won’t have much more time to contemplate the blooms in my gardens. Oh, well. Fall will bring a big bulb order this year, so there will be future planting.

And there was one recent, accidental planting. The week before RAGBRAI, I had stopped at HyVee to buy healthy food (doughnuts) for breakfast, just to surprise Audrey, and I noticed that they had only 4 trees left for sale,  for $5 each. These were trees originally priced at $50 or so.

Yes, I know. I don’t need more trees. But two were crabapples—trees that would remain fairly small. The other two were cherry trees that will grow big, but come on–$5.

So I told Audrey. Her reaction was, “let’s go look at them.” We decided we could plant some and give some to our daughters, so we bought them. When Audrey paid, the cashier asked if that closed out the trees, and Audrey truthfully said “yes,” and the cashier said “that’s another 75 percent off.”

We ended up giving one to a daughter, and planting three in our yard. We now have a new Prariefire crab apple, Coral burst crab apple and a Yoshino cherry.

We have many crab apple trees—there are two in front and four in back already, so this is crab apple numbers seven and eight. But we had none in our lower yard, and planted the other in a garden by itself.

I have no excuse for the cherry tree. It’s just crowded into the yard like a tourist on a Paraguayan bus. It may or may not survive—this Iowa climate is probably the extreme end of where it can live—but the Japanese maple and weeping cherry trees in back have survived, so maybe this will, too.

Anyway, I know it’s a bit crazy for us to plant more trees. But the ash borer has just been spotted in Fairfield, so if you feel the urge to plant a tree, just make sure it’s not an ash and plant, plant, plant.

Anyway, summer 2013 has been a blur. It’s over too soon. I actually have to work next week, and will spend much of the rest of August catching up on overdue reports and prepping for the fall semester.

It is some small comfort to look forward to what these new trees will do in the spring.

It was cold this morning—frosty, with a low in the upper 20s. The next week is supposed to be like this, as a powerful cold front charged through yesterday, bringing rain and then temperatures that plunged like a lemming over a cliff. 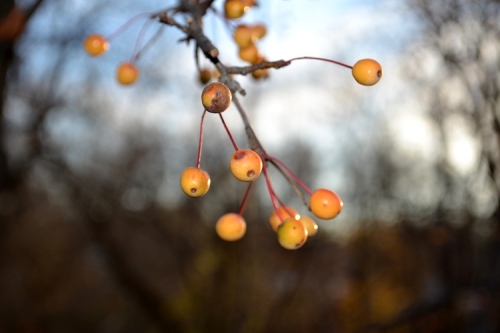 Crab apples in the later afternoon, Oct. 26, 2012. I like the background and partly blue sky, too.

Fall is getting on. Some trees still cling to leaves, but for the most part, the shape of the Iowa land, often cloaked in vegetation, is emerging. You can see the brown hills, covered in decaying leaves, through the grey trunks of cottonwoods, oaks, ashes and others.

So today, when I raked for a while in my backyard, I was a little startled to see a hollyhock—a summer flower—still gamely in bloom. It’s a young plant that I put in just this year, so maybe that explains its odd behavior. I hope being in bloom now doesn’t mean the roots will have any trouble getting into their winter coma. Because, let’s face it, over the next few nights, there’s going to be some damage to these delicate green cells.

Anyway, I dropped my rake and got my good camera and snapped a few late fall images of flowers and crab apples and the few hanging leaves left on the late trees. Here is a flickr slideshow of more.

Spring Is Busting Out All Over!

Line of daffodils and tulips along the back wall.

Well, when we returned to Iowa, our front lawn was trying to revert to prairie. Unlike England, Iowa had some rain last week, and the tall grass showed it.

As did the flower-palooza that took over my lawn. Crocuses are all gone, so I could do a quick mow in front, but late daffodils and early tulips are overlapping each other, which made the co planting we did under trees and along the wall in back seem like a good idea.

Redbud tree in front garden. Old one in back is covered in pink.

And the spring trees! Redbud are in full glory, pink flowers crowded on their grey limbs, with pretty tiny green leaves just starting to unfold.

Crab apple in back has lost of flowers and buds, so it's show should last a little while.

Crab apples are just at their prime, perfuming the air with their sweet scent.

And lilac! The big old ones by the back bedroom aren’t really kicking in yet, but some of the younger lilacs are already in bloom. Tulips, lilac, crab apple, redbud—it’s as if every spring flower were rushing to bloom all at once.

Pollinators must be giddy.

The catalpa in the back, which I had worried was dead, is robusty declaring itself alive and growing.

Peonies are not yet blooming, but are up, and it won’t be long before the early frilly ones go from bud to flower.

Not all is happy in the garden. The 100 irises that I foolishly added to the long parade of failed irises seem nowhere to be found. The sargent crab apple is still stubbornly not blooming, as are the hawthorn and apple trees. Well, they may finally catch the bug next spring, we’ll see.

Another crab apple. I have one white and two pink in back, a white and pale pink one in front. All that bloomed last year are blooming this year.

Today I have way too much to do and have foolishly delayed my return to the office by extending spring break another hour or so, just to catch a bit of the glory of spring in my lawn. I loved being in England and will go again as soon as I can, but I also love being in Iowa in this weird, early spring. 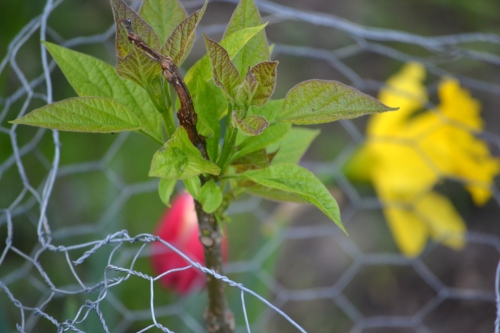 Catalpa tree in back, that Mimi gave me. Take that, doubting Joe, I'm alive and I'm gonna grow!

No April Fool’s joke to finish with, just wishes that in this spring month in your corner of the world, things are green and flowering.  Here is a more complete set of my April 2 photos.

Tree of Hope is on the Way

Trees that I'm growing in my office to transplant home--three thriving Ironwood, one dead crab apple and one crab apple with a new shoot.

Not just the promised Catalpa from my sister in Davenport—which I owe her an Iowa lily for—there is other good tree news to report.

I dug up some root sappers from crab apple trees near Warde Hall that I like, in the hopes of getting such a tree started in my own forest—formerly known as “backyard.”

As you can see, the crab apples did not fare as well as the Ironwoods that I also planted to be guarded and tended by office gnomes. But even though most of both crab apples died, one sent up a new shoot. Just about a week ago, I accidentally knocked that shoot off when closing my window, which I thought was the end of the root sappers.

Hope springs eternal. This photo is from this morning. Clearly, the crab apple tree root sapper is the Hillary Clinton campaign of the tree world—you may think it dead, but it keeps coming back. Lets hope the long-term prognosis for this little tree (which, unlike the Ironwoods that will likely go behind my fence, actually already has a designated spot in my backyard grove) is better than the campaign.

Closer look at baby crab apple. The full-sized tree has reddish leaves and is fairly large for a crab apple. three of them grown in a group near Warde Hall.