Keep an Eye on the Money and the Snow 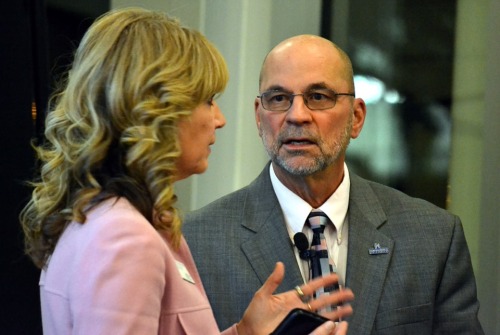 At first glance, the 2019 Barbara Knapp Lecture at Mount Mercy University didn’t seem like something that would appeal all that much to me.

Given by an accounting professor from Misericordia University in Dallas, Pennsylvania., the Oct. 30 speech in the Sisters of Mercy University Center at Mount Mercy University was entitled “Addressing Financial Mismanagement in Volunteer and Nonprofit Organizations.”

But past Knapp lectures had been good, and I enjoy making images at Mount Mercy events, so I decided to take a chance, roll the dice, see if lady luck was with me.

And she was. Unlike the ruinous gambling addictions that ensnare some who volunteer at nonprofit agencies, this particular game of chance came up aces.

Dr. Fred J. Croop did indeed cover financial controls that he sees as essential to preventing problems, but also told several real human stories touching on tragedy and ruined lives. He noted the scope of nonprofits in America, which collectively are quite large, and how key they are to small towns where the library foundation or volunteer fire department depends on fund raising to function. 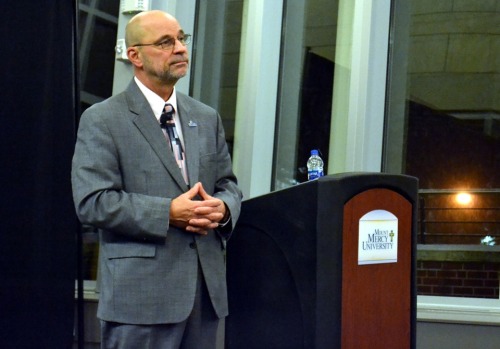 One point that gripped me about Dr. Croop’s talk was his portrayal of the perpetrators of the frauds. They aren’t evil, greedy hobgoblins, but real flawed humans who fall victim to temptation. He touched on many cases of theft from nonprofits—one of which involved a former student of his.

“I would have trusted him with my life,” Dr. Croop said. And yet, the person in question became addicted to gambling—legalized in Pennsylvania a decade ago—and the temptation proved too great. Which led to theft, discovery and shame.

Dr. Croop spoke of financial controls as not just a way for nonprofits to protect themselves and donors—but also as a way for them to protect their employees and volunteers who may otherwise be tempted to help themselves. Monthly reconciliations involving someone other than the treasurer, an insistence that employees take some vacation time, rotating financial duties, making sure duties are properly divided among non relatives and that boards are attentive—not all of the controls Dr. Croop advocates would be all that easy at all small nonprofit agencies, but fraud can be very costly and potential existentially threatening, so prevention seems worth it, to me.

I think small town Iowa is not all that different from the Pennsylvania towns Dr. Croop described. We too have government providing fewer services, causing more pressure on nonprofits. At the same time, population drops means the pool of volunteers to run these agencies is thinner. And gambling is a big industry in Iowa, too.

What a storm. Well, we had some weather the night he spoke, too. Dr. Croop, at least, said he was enchanted by the snow. Here in Iowa, where the month of October started with flowers and butterflies and proceeded rapidly to frost followed by several snowfalls, the white stuff is indeed pretty, but also causes some caustic reaction. As Dr. Croop was speaking, a Halloween Eve snow wafted down on the University Center.

The next morning, news reports said there was something like 40 traffic accidents in the Cedar Rapis area. Despite our life experience, we Iowans have to learn how to drive on snow every year. We have to be reminded to watch the weather and roadway.

And if we are involved in a nonprofit agency we have to watch the money to prevent financial storms that could slip us up badly.

Well thank you, Dr. Tracy Tunwall, chair of business, and Barbara Knapp, MMU trustee whose generosity fuels this annual lecture series. Despite my allergy to money and numbers (which explains the writing career), I found Dr. Croop to be equal parts scary, engaging, interesting and thoughtful.

And I am glad he liked the snow. It’s nice to be reminded that it’s pretty.