So What’s A Warm Saturday For, Anyway?

Bridge on a bike trail in Marion, Iowa. It was a pretty, sunny, warm day today in Iowa. Snow tomorrow.

I spent part of the day indoors today, because I had to get some papers graded, but I was lucky to have two outings.

In the morning, I rode my winter beater bike, an old Schwinn mountain bike, to the gym and for a brief trail ride.

But the true fun was this afternoon. My wife had some errands to run, so I stayed home grading papers. She suddenly popped in the door, announced she was meeting some grandkids at the park, and did I want to come?

The sun was shining. The temperature was rising above 45 degrees. My wife had told a grandson just a few days before that it was always too cold to play at a park if the temperature was below 45, but that explanation just didn’t hold up today. So away I went. 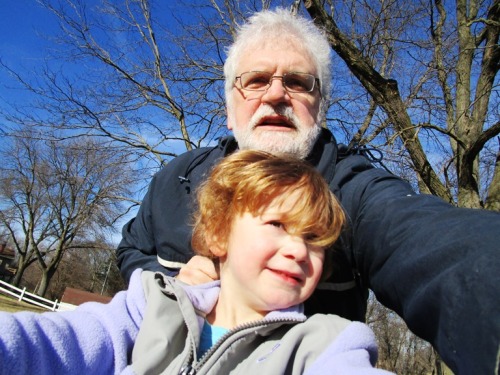 Me on a ride-on bee with Amelia. Later, she would be a princess and a dragon would abscond with her on the same bee, but that drama has not started yet.

The park interlude was a blast. Among other things:

Well, what a fun afternoon. I don’t know how many sunny, warm Saturdays there will be before March, but we put this one to good use. 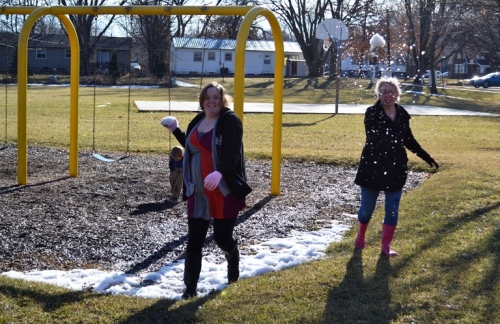 More park scenes–my daughter and wife attack me with snowballs. Below–youngest of the four siblings at the park like merry-go-round

Finally, just because I can, I bought some flowers for my wife, who just returned from a trip to England. I liked how the morning sun streaming in the dining room window lit the bouquet, so I photographed it, and it seems a nice foreshadowing of the coming spring that is only a few weeks away: