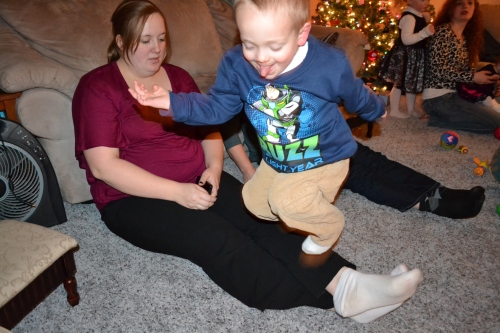 Leaping into leap year. Tristan hops over his mom. Yes, I'm sure grandchildren (and plants) will continue to be features of this blog in 2012.

I’m not really big on New Year’s resolutions. Not that I’ don’t buy into the ideal of self improvement or making changes for the better, but the whole New Year’s thing is so artificial anyway.

We celebrate an arbitrary day when the sun’s tilt on the horizon is frankly not at any astronomically significant point. We’re past a solstice, long away from an equinox, and thus we are noting another orbit from a really odd point in the planet’s journey.

So be it. Rather than make any general life resolutions, what do I resolve for this blog?

Anyway, I hope I can at some point in 2012 make you laugh, make you mad, make you glad that you share this journey on planet Earth. I started this blog as an experiment just to see what blogging is like and for.

I guess I feel that the experiment is worth continuing. And I hope some of you, my readers, agree.